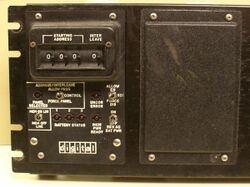 An MK11 system contained six hex control modules (of four different types), and then a group of up to eight pairs of hex memory array modules; they were all plugged into a large custom 24-slot backplane (DEC part number 70-14226-0), all housed in a BA11-K mounting box.

The control modules included a pair of memory bus interface boards (an M8158 address buffer board, and either an M8159 or M8164 data buffer board; the M8159 could only be used with 64KB memory modules, whereas the M8164 could be used with either those or 256KB modules); and two pairs of control boards (an M8160 Control A module, and an M8161 Control B module), one set for each controller of the MK11 system. The Control A modules generated timing signals, did module addressing, checked the configuration (below), and did memory refresh. The Control B modules interfaced to the memory modules, and computed and checked the ECC.

The board organization in the MK11 is (viewed from the board insertion side of the backplane, not the wire-wrap pin side, as is common in DEC documentation):