Difference between revisions of "UnixWare" 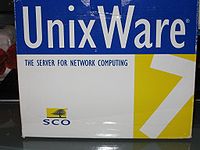 I've seen UnixWare used in all kinds of call centre applications with the AT&T g3 definity switch... I remember this thing running the voice mail appliances, and a few other things. UnixWare ran on x86 computers. Unixware is a SYSV r4 derived OS.

Unixware started out as a Univel/USL product, 1.0 was primarily setup to integrate in Netware environments, I recall TCP/IP being optional!

Versions 2 included multiprocessor support, and then was purchased by By SCO who released 3 updates for version 2.

This version removed support for legacy Xenix binaries to cut out the Microsoft royalty.

This article is a stub. You can help by expanding it.
Retrieved from "https://gunkies.org/w/index.php?title=UnixWare&oldid=8487"
Categories: