The first Macintosh, the 128k was introduced in 1984. Known at the time for the Ridley Scott ad that was only shown once on TV (At the Superbowl) this was the first successful mass-produced machine to introduce a GUI as the primary interface.

There were various models introduced as styles and needs changed through the lifespan of the 'classic' Macintosh. On this wiki we are going to stick to the m68k versions, and the old world, 1st generation PowerPC Macintoshes.

The original compact Macs had 68000 CPUs and anywhere from 128KB of RAM up to 4MB, and a monochrome display. The Mac Plus introduced SCSI, however it was for external devices.

Later models included a 68030 CPU, and a color display. 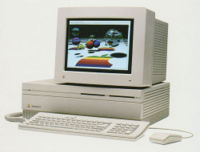 The Macintosh II series all had a 68020 or better CPU and ran System 4 through 7.5 depending on model. A/UX was available as an additional OS. Macintosh II's can also run NetBSD.

The Mac II's were expandable unlike the first generation Macintoshes with NuBUS slots, and some models even had PDS (processor direct) slots. All models featured a SCSI bus, and they all had the ability to display color.

Macintosh II's with an appropriate CPU/MMU combination can run NetBSD or A/UX.

The Quadras all featured 68040 CPUs and featured desktops, LC's and server models. These were the last models to feature the 68000 CISC CPU.

These were the first Macintoshes to feature a PowerPC CPU, starting with the PPC601, and going up to the 603. There were attempts at making them Prep/Chrp compliant however they never did run any 'standard' prep/chrp OS's.

Classic 68k and PowerPC Macs are notable not so much for their hardware (though they tended to be more sophisticated and use higher-end components than other personal computers of their eras), but for their operating system, MacOS, Macintosh System Software... it goes by a few names.

A few notes for anyone trying to get an old Macintosh running.

The SCSI partitioning tool that comes with all versions of MacOS will REFUSE to partition a NON Apple hard disk. There is a hack to alter the tool so it will, or the easier way out is to use the install diskettes from A/UX.

A great resource for boot floppies can be found here. I used them to get a PowerMac 5400 back into action.

Today, both 68k and PowerPC Macs, as well as right up to the latest versions of OS X are all emulate-able, with varying degrees of ease. We'll concentrate on emulating "old world" Power PC and Motorola 68k based Macs here.

Mini vMac primarily emulates the old Macintosh Plus. It's 68000 only, and really suited for MacOS 1.x - 6.x, although 7 can run, it's not very useful in a maximum of 4MB of RAM. There is a development branch which emulates the Macintosh II.

Basilisk II is the de facto official emulator of the MacOS 68k environment. It's important to note that the emulator is highly customized toward running MacOS inside it, and will not handle AU/X or modern UNIXes written for 68k Macs. See the Wikipedia article for more information. Guides and compatibility tables and so on will be posted here later.

Cockatrice III is an attempt to stabilize Basilisk II by turning to a much older version, and rebasing everything off of the generic drivers. I've been more focused on networking by adding libpcap and SLiRP support. While not as feature rich, it does networking tasks much more stabler than the newer versions of Basilisk II.

Shoebill is a specialized Mac II emulator for running A/UX. The main project page provides more up to date information.

SheepShaver emulates the first generation PowerPC Macintosh models. Please note that SheepShaver will *NOT* run OS X. SheepShaver is good for emulating OS 8 & 9, for those that still need it.

PearPC is a 'new world' PowerPC emulator that is capable of running OS X. Keep in mind that it is VERY slow, sometimes upwards of a factor of 40x slower per clock than with a PowerPC (a 2Ghz p4 performs like a 40Mhz PowerPC...)
Retrieved from "https://gunkies.org/w/index.php?title=Macintosh&oldid=19901"
Category: