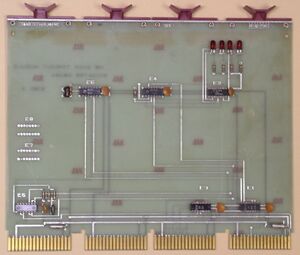 It provides the grant timeout circuit which is not included in those two CPUs.

It was a quad format card, which plugged into any available SPC slot. The M8264 doesn't tie into the CPU, it just looks at UNIBUS lines, so it can be plugged into any UNIBUS machine (near the start of the bus, since the bus grant lines it monitors are wired sequentially).

(The M8264 also has a synchronous 4-bit up/down counter, but that's apparently just there to count timeout events, and display the count in some LEDs - probably just to make sure it isn't happening too often.)

The M8264 was later dropped when the KD11-EA CPU, with a grant timeout circuit built in, came out.

How can a bus grant go unused? There are several possible causes for an unused grant. One possibility is that noise on a request line will look to the arbitrator (in the CPU) like a valid request.

Another possibility is that if a device requests a grant (i.e. posts an interrupt request), and then drops the request at just the right time (perhaps because the device is reset), a grant will be sent out when there's no device waiting to take it.

The M9302 does a very similar thing to the M8264, at a high level - prevents unused bus grants from hanging the machine - albeit with a different mechanism (by turning an 'unused' bus grant into a SACK). However, therein lies a mystery: the M9302 appears in EK-11034-OP-PRE2 (above), and one can deduce that the M8264 was produced after that came out, and post-dates the M9302 - but it fixes the same potential CPU hang issue. The M8264 thus seems to exactly replicate the functionality of the M9302. So why was it produced?

One example would be a poorly behaved or malfunctioning device: not passing a grant along (for the M9302 to turn around), but 'eating' it, but without doing the interrupt cycle with the CPU. So either a hard-failed component in the device's grant-passing circuit, or some design flaw. (If the system is using an old-style M930 UNIBUS terminator, without SACK turnaround, an unused grant could also hang the system; but switching to an M9302 would be easier than an M8264.)

The M8264 was apparently the first attempt to deal with this; later, the CPU was modified to put the grant timeout circuit back in.

Note that if there's any break in the grant line (perhaps a missing grant continuity card) at any point before it gets to the M9302, the M9302 will jam SACK on. That is because the resulting 'open' input to the TTL gate monitoring the grant line in the device immediately down-stream from the break (perhaps in the M9302) will float high, thereby looking like a permanent incoming grant, which will be turned around by the M9302 as a permanent assertion of SACK.