The MM11-W was a fairly rare 64 Kbyte core main memory system for the later PDP-11 UNIBUS machines (it was a standard option on the PDP-11/60). An MM11-W was composed of a four board set:

The MM11-W also supported interleaving between a pair of MM11-W units.

The board organization in the MF11-W backplanes is (viewed from the module side of the backplane): 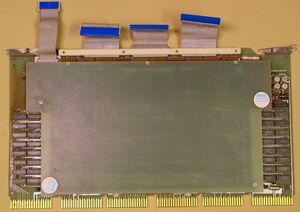 The H224-C/D is connected to the G116/G236 cards with 'over the back' flat cables, which carry the sense/inhibit signals from the core stack board to the electronics board. It is connected to the G236 with a 20-pin cable, and to the G116 with three 40-pin connectors. The cable end on the G116/G236 end is a standard Berg header, but on the H224-C/D end, the cables are soldered directly to the board, not plugged into a connector.

Like the MM11-U, installing an MM11-W (non-parity) module set in an MF11-WP backplane will likely cause the machine to hang when that memory is referenced.

This is because during parity operation, the SSYN signal is routed through the M7259 parity controller board, and that only issues the SSYN once it has checked that the parity is OK. On non-parity installations, the 'proto-SSYN' from the rest of the memory is just hard-wired straight to the output to the UNIBUS.