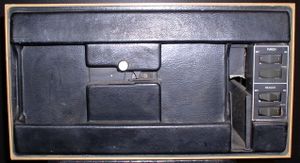 The mechanical portions are the same in the '04 and '05 types, but they differ in the control electronics in them. Both types include an electro-mechanical punch (a Roytron Model 500, modified by DEC), and a photo-electric reader (manufactured by DEC), which are completely separate, but housed in the same frame, and share a power supply. 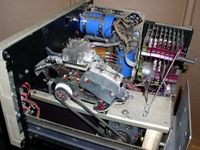 All the models listed above come in 50Hz and 60Hz versions (which are identical except for the punch pulley; so there are no separate 50Hz versions of the reader-only models).

There is also a backplane to hold the control electronics, which are a number of FLIP CHIPs. The backplane in the PC04 has 8 slots; that in the PC05 has 12 slots. (In addition, there is also a controller in the computer.)

There are a myriad of different versions, in addition to the variants above, particularly in the '04.

To start with, there are two generations of each type: in the earlier, input data is strobed during reading by a signal from the stepper motor; the later strobes the data by sensing the feed holes. No documentation has yet been located on the earlier generation, but there was an ECO to upgrade units to the later.

There are also different versions of the PC04 for different PDP-8 models (they differ as to which FLIP CHIPs are used, as per the tables below):

along with equivalent versions of the punch-only and reader-only models.

(There is disagreement between the May 1973 revision of the manual, DEC-00-PC0A-D, and the April 1972 revision of the engineering drawings as to the version numbers. The ones above are from the drawings, which also do not show a punch-only model for the -8/I, with the reader-only version for that being the PC04-RB; the manual claims the -8/I reader-only and punch-only versions are the PC04-R and PC04-P, which the prints list as being for the -8 and -8/S.) 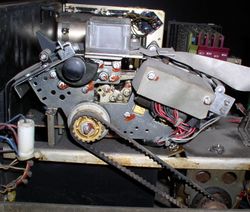 There is also a special version of the reader/punch model for the KI10, the PC04-CL. The 50Hz versions of all of these differ in the last letter, which is incremented; e.g. the KI10 50Hz version is the -CM.

The control switch array on the front panel differs between the reader-punch, reader-only, and punch-only versions; the PDP-10 versions have their own switch array formats. Also, the '05 does not have a 'Punch On' switch, as the PC11 can turn the punch on and off remotely.

The cable arrangements for the '04 and '05 are almost as complicated as the model/version situation!

All have a single-width PCB with plated contact fingers at one end, to plug into the backplane in the PC04/05; the connector on the other end varies, depending on what it goes to.

The early PDP-8 models use cables with a PCB on both ends, and the PDP-8 end plugs into a slot in its backplane. The -8/E uses BC08K cables, which have an M955 PCB on the PC04 end, and a 40-pin male-shell Berg connector on the other end, which goes into female Berg headers on an M840 plugged into the OMNIBUS.

This is the pinout of the BC08K:

Pins of the Berg connector which aren't listed in the table are connected to ground.

There are two different versions of the PC11 controller, and they use different cables. The early version (with a separate dual card) uses BC08F cables, which have a right-angle PCB on the other end, which plugs into a connector on the side of the M781 card. The later quad-width version uses BC08Js, which have an M953 on the PC05 end, and a 40-pin male-shell Berg connector on the end which goes into the M7810.

Note: The BC08J looks identical to the BC08K used with the PC04, but they have a different pinout. This is the pinout of the BC08J:

Similarly to the BC08K, pins of both the Berg connector and the PCB which aren't listed in the table are connected to ground. 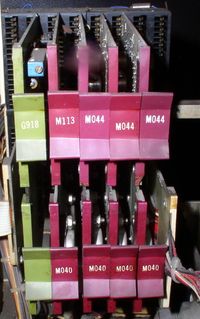 The tables below show the FLIP CHIPs used in each version; the location of boards which end cables, and are plugged into the backplane to carry signals to/from the backplane, are also shown. Cards/cables used for the punch are shown in italics; the others are for the reader. Reader-only and punch-only models will have only the associated cards/cables. 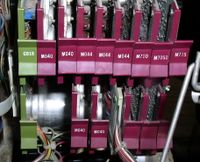 The M705 Reader control card was later replaced by the M7050; the K303 was not included when later revisions of the M710 Punch control card were used.

PC04's can be rack-mounted in 19" rack (such as an H960 rack) with the use of General Devices Chassis Trak telescoping slides number C-300 8-31-8, which have the proper hole pattern in the innermost slide to bolt to the PC04. Other slides can of course be used, but will likely require custom hole-drilling.