This was the last research version of UNIX (although from V7 on, it was spelled 'Unix') to leave Bell Labs. It was also quite a portable version; the Labs had started to move it to other machines, starting with the Interdata 8/32.

The main change in the kernel from V6 (from the user's point of view) was that the UNIX file system had been modified to use 32-bit disk block numbers, to support the larger disks which were starting to appear. Other kernel changes included:

Unix V7 was also one of the first operating systems to ship with a Fortran 77 compiler.

These are the known platforms to run Unix V7

The PDP-11 was the primary platform which Unix V7 was written on. All other V7's can trace themselves back to this version. 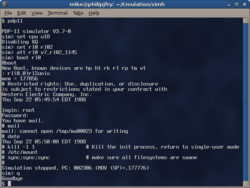