Difference between revisions of "VAX-11/780" 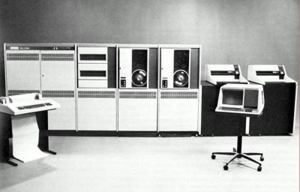 The VAX-11/780 was the first member to ship of the VAX family of larger computers. The VAX series was conceived as the successor to the successful PDP-11 series of minicomputers; in order to make the VAX seem more PDP-11 friendly, they retained the -11 moniker for the first VAXen, and provided the ability to execute PDP-11 object code - hence the -11/780 designation.

One of the main design goals was to increase the address space available, in fact the 'VAX' acronym originally stood for Virtual Address eXtension).[3] The first VAX-11/780 systems shipped with one quarter of a megabyte of main memory, built from 4Kb chips.[3]

There was also the VAX-11/785, which was an upgraded version.

The CPU was the KA780 CPU. It could take an optional floating point accelerator, the FP780 Floating-Point Accelerator; the floating point instructions were performed by the microcode when it was not installed.

The CPU and the other major subsystems in the VAX-11/780:

"In 1981, [George H. Goble] wired together the backplanes of two DEC VAX-11/780's and made the first multi-CPU Unix computer, preceding DEC's dual processor VAX-11/782. The operating system was based on the 4.2 BSD kernel, and the modifications thus made eventually made it into the 4.3 BSD Unix release. At the beginning of the 4.3 BSD user manuals, Bill Joy wrote a special note of thanks to GHG for being courageous enough to put the multi-CPU kernel into a production environment before anyone else did. (However, the frequent crashes for a while inspired the writing of many humorous text files by the Purdue University Electrical Engineering student body, such as 'The VAX had a Blowout', to be sung to the tune of London Bridge is Falling Down). The development of the Dual-CPU Unix system was the subject of Goble's Master's thesis." 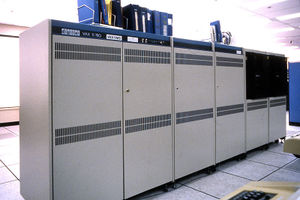 An actual VAX-11/780 system; the CPU is in the double cabinet on the left

SIMH is the only known emulator for the 11/780. SIMH can address up to 128MB of RAM emulating an 11/780. Also the following peripherals are emulated:

More information about SIMH's VAX 11/780 emulation can be found here.