The PDP-11 is a series of computers introduced in 1969 [1] by Digital Equipment Corporation (DEC); it was in production at DEC from 1970-1990, after which the line was sold to Mentec, who produced a few newer models. 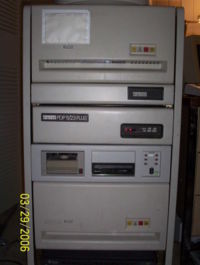 The machine word size was 16 bits, and it was a general register architecture. (For more information about the architecture, see PDP-11 architecture.)

PDP-11's came in two groups: those which used the UNIBUS for a bus, and the later ones which used the QBUS. Eventually DEC stopped producing UNIBUS PDP-11's (the last were the PDP-11/44 and PDP-11/24); later 'UNIBUS' machines (the PDP-11/84 and PDP-11/94) actually contained QBUS processors with a QBUS<->UNIBUS adapter board.

It could run a variety of operating systems. Many were produced by DEC themselves, but several were produced by third-parties. Often DEC would purchase or rebrand this OS and resell it as their own product. For example, UNIX sold as Ultrix by DEC.

This was the first shipping unix distro by the CSRG. It included a few fixes, and a bunch of the BSD utilities. This released was based on Unix System 6.

This version was a port of the 4.3 feature set to the PDP-11. Although considered impossible by many, it accomplished this by using overlays for portions of the kernel, and exe's to allow for programs larger then 64kb.

This version is still supported, and if you really felt the need to load a Unix for use on a PDP-11 this would be the best fit. It has support for TCP/IP, large memory space and is the best UNIX experence you are going to get on a 16bit mini.

This article is a stub. You can help by expanding it.
Retrieved from "https://gunkies.org/w/index.php?title=PDP-11&oldid=12304"
Category: