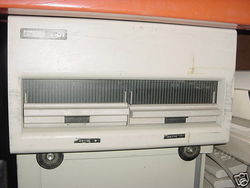 The RX02 included the M7744 Controller and M7745 Read-Write card. Each drive cabinet holds a pair of drives (the left-hand drive is always drive 0).

These drives were used as primary mass storage devices for later low-cost PDP-11 systems, such as the LSI-11, and as such as 'console' floppies for the LSI-11 console computer in the VAX 11/780.

DEC normally left track 0 unused (to hold bootstraps). They also used an idiosyncratic layout of the 'logical' sectors on a floppy, intended to maximize the performance: the first logical sector of each data track was offset by six 'physical' sectors from the 'first' sector of the preceding track.