Difference between revisions of "KDF11-B CPU" 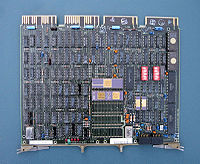 In addition to the basic CPU functionality, it included chip sockets for adding the KTF11-A (memory management) and the KEF11-A (FP11 floating point). The sockets can also hold the KEF11-B 6-chip carrier implementing the PDP-11 Commercial Instruction Set.

Line connection was via two separate 10-pin Berg connector headers on the top edge of the card, using the standard 10-pin DEC asynchronous serial line pinout. They both provided EIA RS-232 connectivity, at speeds of 50 to 19.2K baud (when using the on-board clock); on both lines receive and transmit speeds are the same, but the speed of each line could be set independently.

There are several options for cabling to the serial line ports on the KDF11-B. One is to run individual cables, such as the BC20N-xx (Berg 10-pin connector, to a female DB-25S connector wired as a DCE - i.e. including a null modem) to each line's Berg connector.

The alternative approach is that DEC produced a number of distribution panels which can be used with the KDF11-B; all have a flat cable which splits into two sub-cables, each with a Berg 10-pin connector which plugs into one of the Berg headers. One is the D315; in the variant applicable to the KDF11-B, it has two male DB-25P connectors (the PCB has locations for four, but only two are used), wired as a DTEs.

A more flexible choice is the PDP-11/23 PLUS cabinet kit (also called a 'Patch and Filter Panel' in some DEC documentation), DEC part number 54-15422-01; it consists of a flat cable (split as above) with a Berg connector, plugged into a distribution panel which contains two male DB-25P connectors, and two rotary selectors which select a baud rate. Note: use of this requires jumpers on the CPU to select the use of an external baud rate clock signal.