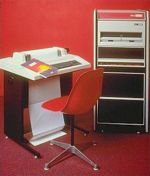 The PDP-11/05 was absolutely identical to the PDP-11/10; the only difference between the /05 and the /10 was the number printed on the front panel (the KY11-J Programmer's Console). The /05 was aimed toward the OEM market, while the /10 was intended for end-users. General usage (following DEC's lead) is to refer to all these machines as '11/05's.

The earliest units came in a 5-1/4" box, which had room for only a double system unit backplane. (Additional memory was initially indicated to require the use of an ME11-L memory unit; similarly, a BA11-E Mounting Box was initially indicated as required to hold any device controllers beyond the limited number the CPU backplane would hold. Alternative solutions to both were of course possible.) The power supply of this box does not have an 'Hxxx' assembly identifier, only a DEC part number: 70-08731; and 54-09728 for the DC Regulator Module.

The PDP-11/05 and /10 came in three versions, with four different versions of the main backplane (the 9-slot system unit holding the two CPU cards). All have two single-height slot sections for the KM11 card, plugged in to debug the CPU; each slot is numbered with the correct KD11-B KM11 overlay for a KM11 in that slot. (The KM11 switches function identically in both slots.) 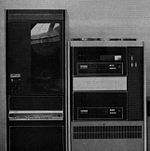