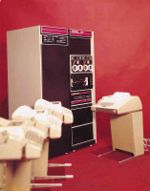 It was the only one to use discrete logic for its control circuits, as opposed to micro-programming (this was because the cheap, fast ROMs needed for economical implementation of that approach did not exist yet at the time it was designed.

The -11/20 did not have, as standard components, many of the capabilities that later became standard on later models, such as hardware multiply and divide, floating point, and memory mapping. DEC provided a series of accessories that provided some of these capabilities.

One was a co-processor for the multiply/divide instructions; rather than additional instructions in the CPU, it was implemented as a device on the bus, making this model incompatible from the rest of the PDP-11's.

The KT11-B Paging Option was logically an addition to the CPU, interposed between the KA11 and the UNIBUS, but also tied into the CPU; it allowed hardware-based timesharing, and use of up to the full 248 KBytes of memory addressable by the UNIBUS.