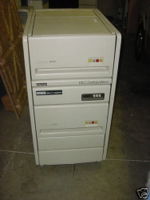 The PDP-11/03, which initially shipped with the new LSI-11 CPU, marked a major change in the PDP-11 family in two ways:

1975. With the use of LSI semiconductor technology (the LSI-11 and LSI-11/2 processor), it was a compact implementation of the -11 architecture. It was limited though, to 32KW memory, only one processor operating mode, and limited floating-point instructions (the FIS). Available options: CIS, WCS, EIS/FIS.

A PDP-11/03 was also used as the diagnostic and control unit for the VAX-11/780's CPU; it would bootstrap the system.