The difference between the two CPUs was whether they worked with the FP11-B or FP11-C FPP. The FP11 floating point was optional, as was the KT11-C Memory Management Unit (the first implementation of the full PDP-11 Memory Management).

The PDP-11/50 and PDP-11/55 were systems which used the exact same processor, but were sold pre-configured with the special high-speed MS11 Semiconductor Memory System (specific to the PDP-11/45), using 350 nsec MOS or 300 nsec bipolar memory, respectively.

The machine's 18-bit-address UNIBUS allowed it to have up to 256Kbytes of main memory. Later non-DEC products such as the Able ENABLE allowed use of up to 4Mbytes, via an Extended UNIBUS.

The MS11 high-speed memory was dual-ported: one port went to a special high-speed bus to the CPU (called the Fastbus), which was implemented as part of the CPU's backplane; the other went to a second UNIBUS (the 'B' UNIBUS).

That UNIBUS could either be connected to a second PDP-11 (creating a multi-processor PDP-11 system), or the -11/45's main UNIBUS (the 'A' UNIBUS), so that DMA devices on that UNIBUS could do I/O to the fast memory, which was accessible only from the CPU when the two UNIBUSes were split.

Note that if the system contained a dual-UNIBUS RH11 MASSBUS controller, devices attached to that could reach the fast memory in a split-UNIBUS system if the RH11's second UNIBUS was attached to the 'B' UNIBUS, giving them a high-speed path to the memory on which there was no contention with the CPU.

The high-speed memory could be configured in two semi-independent banks, each with its own dual-ported M8110 (later M8120) Semiconductor Memory Control module.

When the -11/45's CPU went to do a memory cycle, it started cycles on both the FastBus and the 'A' UNIBUS; if that address was in an MS11, the MS11's controller indicated that it had it, over a special FastBus line. The UNIBUS cycle would then be abandoned before the CPU asserted MSYN.

A number of products from Able Computer made use of the FastBus; the Able CACHE/45 (which provided a cache), and the Able SCAT/45 (which was an MS11 equivalent which could support up to 256 Kbytes of memory).

Quoting: Introduced two years after the PDP-11/20, in June 1972. The KB11 was a faster, microcoded CPU built with SSI/MSI (Small/Medium Scale Integration) components. The machine had two different buses: one was a UNIBUS with 18-bit addressing, the other was a fast CPU-memory interconnect. It also introduced split I/D (Instruction/Data) spaces (UNIX used this; the DEC operating systems did not), an MMU (Memory Management Unit) option, an optional FPU (Floating Point Unit). The maximal ammount of memory was 128 Kwords.

The PDP-11/50 was basically the same machine with different memory. The PDP-11/55 (KB11-D CPU) used the modified CPU of the PDP-11/70, where the cache was left out (instead the memory was the faster bipolar memory). It also had the kernel/supervisor/user operating modes seen on the PDP-11/70, but only had a 18-bit addressing range. It was the fastest of the "classic" PDP-11 CPU's when measured by the cycle times. 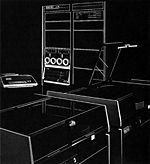