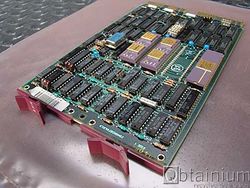 The F-11 chip set (code-named 'Fonz') was DEC's second microprocessor implementation of the PDP-11 architecture. It was used in the KDF11 CPUs. The main CPU was implemented in two chips (carried on a single DIP carrier).

(The KEF11-A requires the KTF11-A, since the floating point registers are actually in the KTF11-A. The reason why is not known; although the KEF11-A is microcode, there are enough pins for both the data bus, and the microcode bus.)

There is also a double-width 6-chip carrier, the KEF11-B CIS chip, which implements the PDP-11 Commercial Instruction Set (CIS); not all KDF11 CPUs can hold this, though.

The F-11 chip set includes microcode which provides 'front panel' functionality named 'ODT'; the ability to read and write to main memory, start the processor, etc. However, the original version of the KDF11-A only supported 18-bit addressing, and even though later versions supported 22-bit addressing, ODT in the KDF11's was always limited to 18-bit addressing: i.e. it is impossible to interact with memory above 256 Kbytes from ODT.

The later KDJ11 CPUs do not have this limitation.