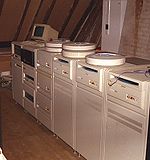 The PDP-11/44 was a high performance UNIBUS PDP-11 system; in some senses a lower-cost successor to the PDP-11/70, although without the very high main memory bandwidth and I/O bandwidth to mass storage of the -11/70, as it lacked the latter's Main Memory Bus and integrated MASSBUS, relying instead on the UNIBUS, and EUB. Its CPU, the KD11-Z, was the last PDP-11 CPU to be made out of discrete chips, and not a microprocessor.

The -11/44 used the EUB for its bus to main memory, allowing it to have up to 4 mega-bytes of main memory. All devices were attached to a semi-separate UNIBUS (it and the EUB shared data lines, but not address lines); DMA devices could gain access to the memory via a UNIBUS map which connected the two, and mapped UNIBUS addresses to main memory addresses.

Quoting: 1979. A middle-class -11. It had the 22-bit UNIBUS map and MMU as standard (up to 2 Mwords on a separate CPU-memory interconnect, called the PAX Memory Bus). The CPU consists of 5 boards, plus one for the FPP (FP11-F, optional), and two CIS (KE44-A, optional). Features: 8 KByte cache, ODT, 2 SLU's (Serial Line Units: console + TU58 console media), RTC (Real-Time Clock), kernel/supervisor/user modes.

The machine also had an almost-FEP (front-end processor) console, based on the Intel i8088, running from PROM. There was no QBUS equivalent.

Trivia: This was the last non-microprocessor-based PDP-11.